You are here: Home > FARSEEING at 18th MobEx Meeting in Bologna
By Lis Boulton on January 23, 2015 in Events and Meetings, FARSEEING Publications and Presentations, News, Resources 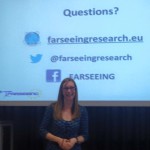 On January 16th and 17th 2015, FARSEEING partners delivered 5 presentations regarding the findings of the project. First up was Lis Boulton, from the University of Manchester, talking about ‘Encouraging older adults to adopt technologies that promote independence’. The presentation was based on the Preliminary Guidelines produced by the project and can be found on this website by following this link: Preliminary Guidelines

The second presentation was given by Nina Skjæret, from the Norwegian University of Science and Technology in Trondheim. ‘Investigating older adults’ stepping movements when playing exergames’ included findings regarding how much older adults move during exergames and the benefits and risks involved in challenging balance.

Alice Coni, from the University of Bologna, presented ‘InChianti-FARSEEING study: Influence of age and gender on sensor based functional measures’. The findings demonstrated few differences between men and women, with the exception of lower limb strength which was lower for the women involved in the study. The study indicates that using inertial sensors within a smartphone is feasible for assessing functional decline.

Kamiar Aminian, from EPFL in Lausanne, presented ‘Instrumented shoes for activity monitoring in the elderly: Measurement system and in lab validation’. Kamiar described the combination of inertial sensors (for locomotion and gait analysis), a pressure insole (to assess sitting vs. standing) and barometer (to detect movement on stairs, inclines and in elevators) that comprise the FARSEEING smart shoe concept.

Finally, Sabato Mellone from the University of Bologna presented ‘Can do vs. actually does: Investigating the association between sensor-based functional measures and long-term physical activity monitoring’. In addition to the technical findings about the capabilities of smartphone as a data collection tool, the study found that participants were able to manage the smartphone independently at home. The smartphone was used to monitor activity for at least 5 days (up to 9 days in some cases). This provides us with useful data regarding the acceptability of smartphones for this kind of activity monitoring.

View all posts by Lis Boulton →